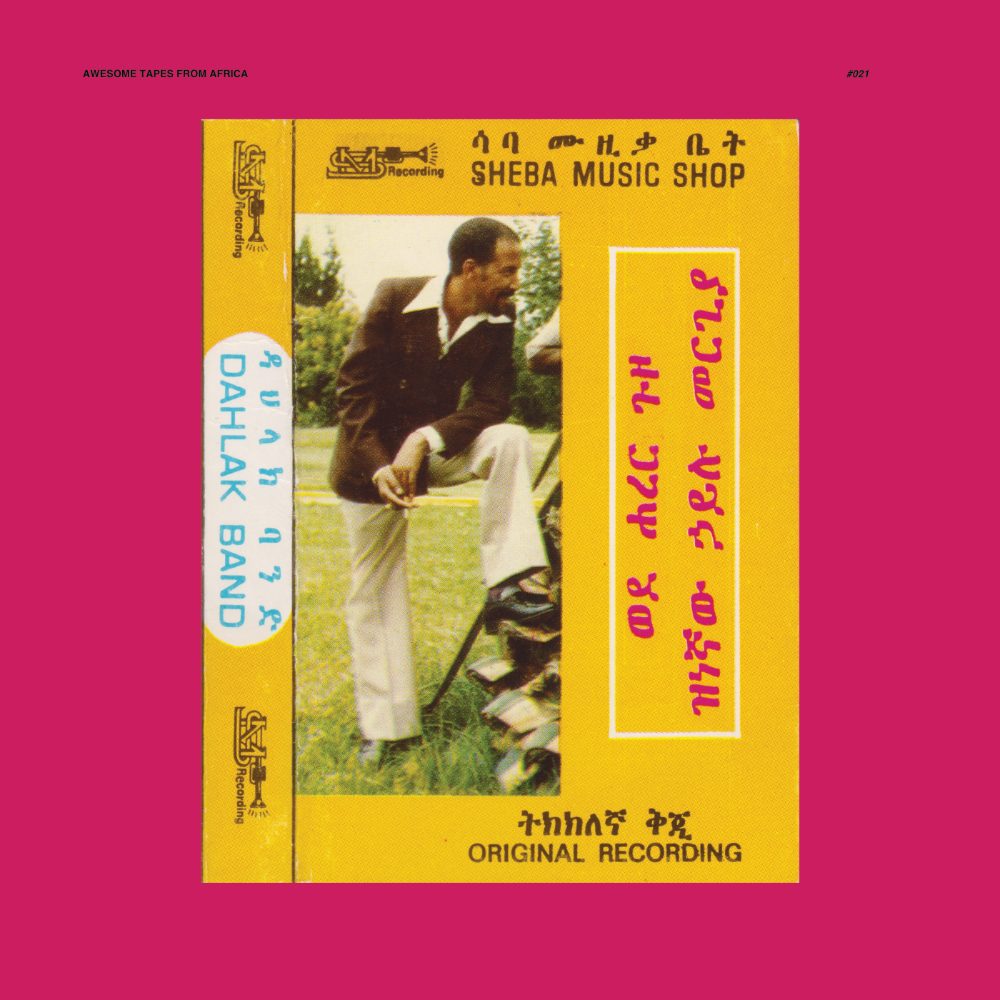 To my surprise, Hailu Mergia (keyboard/accordion-player and bandleader of Ethiopian origin) sent me his only copy of this cassette-only release from 1978, Wede Harer Guzo. I knew of Dahlak Band but I didn’t know he recorded with them. The soulful, smokey reinterpretations of seminal Ethiopian standards, along with two Mergia originals, make a considerable impact on your heart, if only you’re still human in these strange and challenging times.

Order at these stores and more:

Details about Hailu Mergia & Dahlak Band:
Hailu Mergia & Dahlak Band’s Wede Harer Guzo is the third release on Awesome Tapes From Africa for Ethiopian keyboard and accordion maestro. In the years since Shemonmuanaye, Mergia has revamped his touring career, playing festivals and clubs worldwide, including a recent tour supporting Beirut. By 1978, Addis Ababa’s nightlife was facing challenges. The ruling Derg regime imposed curfews, banning citizens from the streets after midnight until 6:00 am. But that didn’t stop some people from dancing and partying through the night. Bands would play from evening until daybreak and people would stay at the clubs until curfew was lifted in the morning.

One key denizen of Addis’ musical golden age, Hailu Mergia, was preparing a follow-up to his seminal Tche Belew LP with the famed Walias Band. It was the band’s only full-length record and it had been a success. But his Hilton house band colleagues were a bit tied up recording cassettes with different vocalists. Still Mergia, amidst recording and gigs with the Walias, was also eager to make another recording of his instrumental-focused arrangements. So he went to the nearby Ghion Hotel, another upmarket outpost with a popular nightclub. Dahlak Band was the house band at Ghion at the time. Together they made this tape Wede Harer Guzo right there in the club during the band’s afternoon rehearsal meetings, with sessions lasting three days.

Dahlak Band catered to a slightly more youthful, local audience, while Mergia’s main gig with the Walias at Addis’ swankiest hotel had a mixed audience that included wealthy Ethiopians, foreign diplomats and older folks from abroad. Therefore, their sets featured lighter fare during dinnertime and a less rollicking selection of jazz and r&b. Meanwhile, Dahlak was known more for the mainly soul and Amharic jams they served up for hours two nights a week to a younger crowd.

Mergia released Wede Harer Guzo (“Journey to Harer,” a city in eastern Ethiopia)  with Sheba Music Shop, which was located in the Piazza district but has long since shut down. His cassette copy is the only known source we could find. Jessica Thompson at Coast Mastering managed to restore the recording to clean up layers of hiss, flutter and distorted frequencies, made worse by years of storage. Although there are some remaining sonic artifacts of the era’s recording and cassette duplicating quality, this reissue captures the band’s inimitable vibe.

Recalling the audience’s positive reaction to Wede Harer Guzo’s novel arrangements, he says it sold well and found many fans. However, as no trace of the tape can be found online, there’s no indication as to why the cassette appears largely forgotten until now.

Bluereply
– In reply to: tom

Wham bam thank you, ma’am, my quoinsets are answered!

Only complaint is that I wish the LP came with a download code.

Joereply
– In reply to: Adam

I got his other LP and it came with the download code.. i was really surprised and felt a little jipped this one didn’t

Magic… Sintayehu is a groovy gem !!

Mawulireply
– In reply to: Théo

Remarkable! I’m diggin’ this a lot

[…] Hailu Mergia & Dahlak Band — Wede Harer Guzo. This is a revelation, particularly the track Sintayehu. Wonderful music to end a bewildering year. You can read more at awesometapes.com: […]

one of the oldest music in ethiopia modern time.

Just came across this BBC interview with Hailu: https://www.bbc.com/news/av/world-us-canada-43804958/the-music-legend-who-drives-a-taxi
Watch it and afterwards listen to his music again, will be even more enchanting!