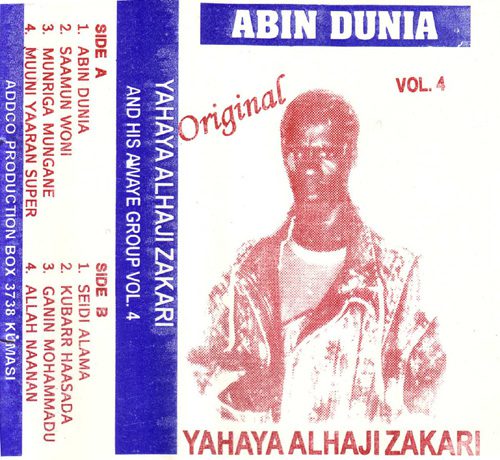 I like this guy’s jacket. I also like Yahaya Alhaji Zakari’s squeaky voice, or perhaps that’s the just the heat-and-dust warbled tape. The tape is a bootleg of another—its cover is a crooked photocopy and the recording just sounds distant. The distortion is particularly intense, in a good way I think. The mix here is fun too: the bass drum, which seems to lead the whole crew, is louder than pretty much everything else. It sounds like a bass-heavy system playing out of a shitty car, loose pieces vibrating each time the bass hits.

I bought this tape in Ghana on the main drag of a place in the capital called Nima. The neighborhood cassette stands in Nima are great because you can find music and movies from all over West Africa, especially Muslim regions. Nima has a higher population of Muslims than most other parts of Accra. The reason for this tangent is you can tell from this artist’s name that he is Muslim. That’s about all I know about this one.

N.B.: You might be wondering why the track order of the downloads is slightly different than the track list on the casette cover. Many of the most Awesome Tapes From Africa contain baffling errors on the cassette covers, labels, and/or recorded program. There’s often a good amount of guesswork in deciphering these tapes…

Really cool, but … where’s side two of Chepkwony?

I know, I know, must remain grateful. But that shit kicked!

side two is coming of Chepkwony. hold your horses, my friend.

glad you enjoyed that one! props due to josh in DC for that tape and others to come. stay tuned.

Excellent. No rush, in reality, but I just wanted to make sure it hadn’t been forgotten.

any chance of this stuff getting a repost?

dug the other blessed gregory productions quite a bit.

First of all, ¡AMAZING BLOG!

Secondly; strange…tracks ‘abin dunia’ + ‘seidi alama’ are up, but the others aren’t. any chance of that changing?

ok, i have re-loaded this one! enjoy

“It sounds like a bass-heavy system playing out of a shitty car, loose pieces vibrating each time the bass hits.”

I take it I drove by you one day..

Cheers from Miami. Love the blog.

I used Audacity’s “change speed” effect on Seidi Alama: 10% reduction seems better than 5% or 20% but I guess I could spend all night fiddling with it… Anyway, WOW, totally different vibe, very loose and relaxed… I think I’ll try it on the rest!

The cheap louis vuitton purses produced by this company are of high standard and used by many celebrities. You can find louis vuitton replica bags nowadays which are exactly a copy of the original and affordable for the layman. It is not easy to build up a reputation among the crowd and replica louis vuitton bags have achieved this position through years of hard work and dedication.

We offer the farouk chi flat iron. We provide the best price and free shipping for all the
chi flat iron. As we know, the
ghd iv styler is the first class and famous brand. So it is the good chance for you. Don’t let it pass. If you are looking for the
babyliss flat iron, you have come to the right place for
instyler rotating hot iron.

Among a huge range of daidaihua
present in the market. lida slimming
makes weight loss easy and quick. Though there may be enormous companies introducing slimming capsule
. This is exactly what slimming capsules
do. Also there is no need to cut down on food while you are taking lida
regularly. lida daidaihua
detoxify your body thereby expelling all the harmful toxins in your body.

Different models of Breitling price differently. The basic line refers to $500. Some masterpieces even reach to $10,000. Therefore, not everyone is affordable for such a luxury. Most of Breitling Windrider customers go to those who pay more attention to the value of Bentley 6.75 . However, Bentley Motors online offer a chance for those people with limited budget. They are exact the original ones and sold at affordable prices.

And Hardy clothing and hardy shirt perfumes by Christian Audigier. The rage for the tattoo and ink art inspired prints and designs now extend to the unique cases that these perfumes come in. A simple, elegant bottle with a no-nonsense cap, inside a case box cylinder imprinted with the hardy shirt art and the well known simple signature script. Just like the clothing and other apparel, hardy shirts perfumes also allude to that rebel biker persona, a simple and highly individual person, but riding and wearing high art.

you got some spam comments on here, bro, but this ain’t one of ’em:

Speaking of Zakari, I finally finished making a test of slowing-down the songs. I got inspired by a Robert Johnson post over at Global Groovers, and started experimenting with Seidi Alama. Less 9% seemed perfect, so I just applied that to all songs, without any individual fiddling. Hope at least one person downloads it AND enjoys it… Abin Dunia was always my favorite tape, and now it sounds like a whole new tape that I’ve never even heard before! Thank you, Mr. Awesome Tapes Dude for posting it in the first place. I remember you said you were cool with the idea of my experiment. Its not to take anything away from you, b.c without you I wouldn’t even have been having so much fun with it!
t