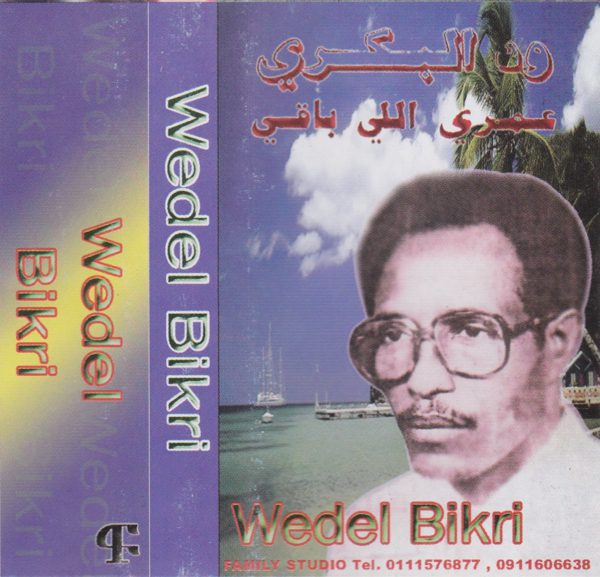 Sudanese tape I bought in Ethiopia recently is really hitting me hard this week. There’s an excellent confluence of things happening on this recording that I am just so into right now: heartfelt tenor vocals; expected Sudanese popular song horn/string stabs; unexpected rhythmic breakdowns and melodic twists. I don’t have any info about this artist. Google deepened the mystery, offering suggestions like “weird al bakery.” So, I guess, just enjoy Wedel Bikri for now.

ah man, this made me homesick as hell. Many thanks

Thanks for these awesome noltagic songs. Though, I don’t understand the language but i so love Sudanese music. Grew up listening to their songs played on the radio… Thanks for the memories.

The way the words are split in the Romanisation is a little funny. Usually, this would look something like “Wad El-Bikri.” Here’s some info in English: http://ethio-pain-music.blogspot.com/2013/08/wedel-bikri-1996-oumri-al-baghi-whats.html

I became really interested in this guy after encountering him on ATFA, so tracked down most of the track names. I don’t speak or read Arabic, so I included the Google Translate versions as well:

Also, according to the ethio-pain-music.blogspot.com post referenced by an above comment, the album name is “Oumri Al-Baghi” (GT: What’s Left of My Years)

Johnreply
– In reply to: Brendan

Hi, Brendan. Hope you all are still keeping tabs on this. I speak and read a little Arabic, and was able to discern that the title of track 4 is يا زمان وين البداية؟ (I’d probably translate this as “O, Time, Where Shall I Begin?”).

Here’s a link to a live performance of the song by an older Wed el-Bikri:
https://www.youtube.com/watch?v=wHUOxACPe7o

Brendanreply
– In reply to: John

Hi, Thanks so much! I’d love to know more accurate translations of the other track titles.
I’m a big fan of Wed el-Bikri. I spent some time a few months ago surfing Arabic language sites and managed to download a bunch of mp3s of his old stuff. This tape is probably still my favorite, but I found a lot of good stuff!

The comment was mine, and it’s gotten deleted. Dunno if this was done by switching formats, because I had made that comment when ATFA was still not a separate, unique-URL website.

I also read and speak some Arabic and have been loving this tape for a while now, definitely one of my favourites from this blog. I can correct the translations and give transliterations of the Sudanese dialect Arabic (which I’m not very familiar with, but it has some similarities to Egyptian, which I do understand a little). I also found a Facebook fanpage which has the Arabic lyrics written out for two of the songs (tracks 2 (only for the first one) and 3) as well as several other songs of Wad al-Bikri: https://www.facebook.com/ودالبكري-709786849197848/

1. Umri al-li baghi: means literally “the rest of my life”, or indeed “what’s left of my years”. I think the first lyrics say something along the lines of “If God wants it, the rest of my life I will not spend longing”. He sings about a woman later on, so I assume it’s a love song, but it might also be similar to other tracks on the tape and talking about longing for homeland.
2. Kordufan: western Sudanese region, he sings about it being “his country”, and “longing for it”, the lyrics are basically a praise song for all the beauties of the region.
The grammatical construction of the two words in the second song (Al-ra’si ash-shuja’) here is dialect, but I think it might mean something like “the courageous chief”, i.e. a praise song for a chief
3. Kull haja wa-la as-safar: From the lyrics I’d say it means something like “You can do everything, but please don’t leave”. I get the impression that it calls for people staying where they’re from, so a song warning against emigration.
4. Ya zaman, wayn al-bidaya: The first line is what John translated above, the second line of the chorus says something which I understand as “may it make you live long until the end” (يعمركو بالنهاية)
5. Ghurba wa-shajan: “exile and sorrow”, repeating similar themes of sorrow

So the main themes of the cassette seem to be love for homeland (and longing for it once you’re living away from home) and the vicissitudes of time. The wistful melancholy of the music thus translates perfectly to the lyrics!

If you’d like more elaborate translations of the two songs for which I found the lyrics, feel free to send me an email, and I’ll try my hand at them. Cheers!

[…] stumbled on this artist on the legendary Awesome Tapes From Africa site a little over a year ago, and this tape was really what sparked my interest in Sudanese […]