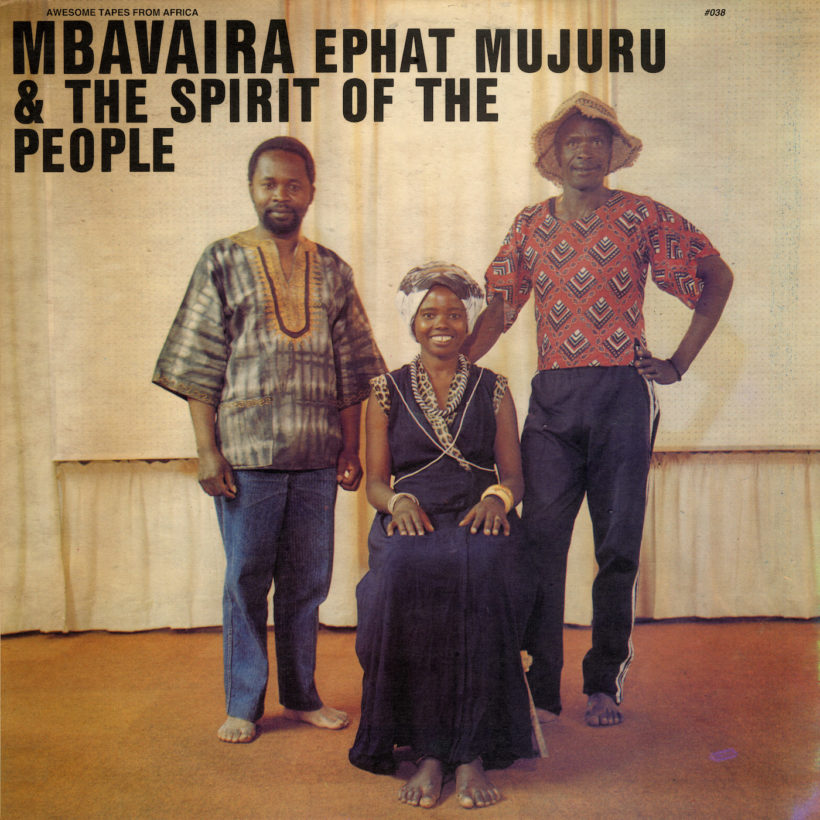 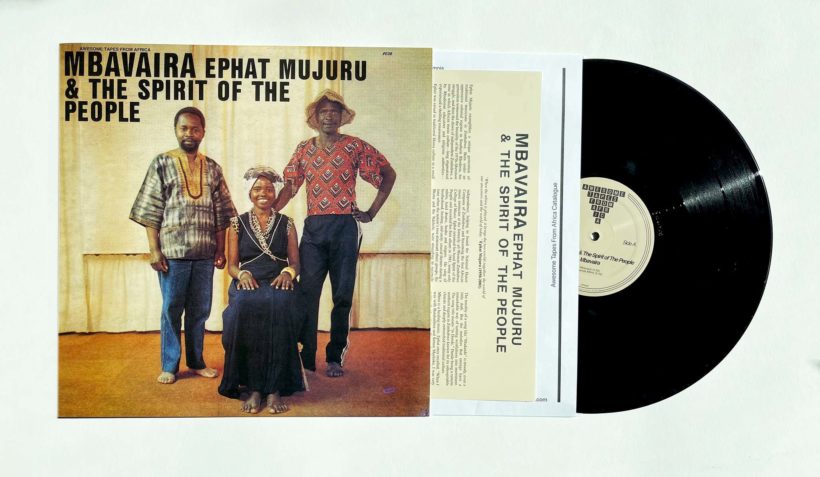 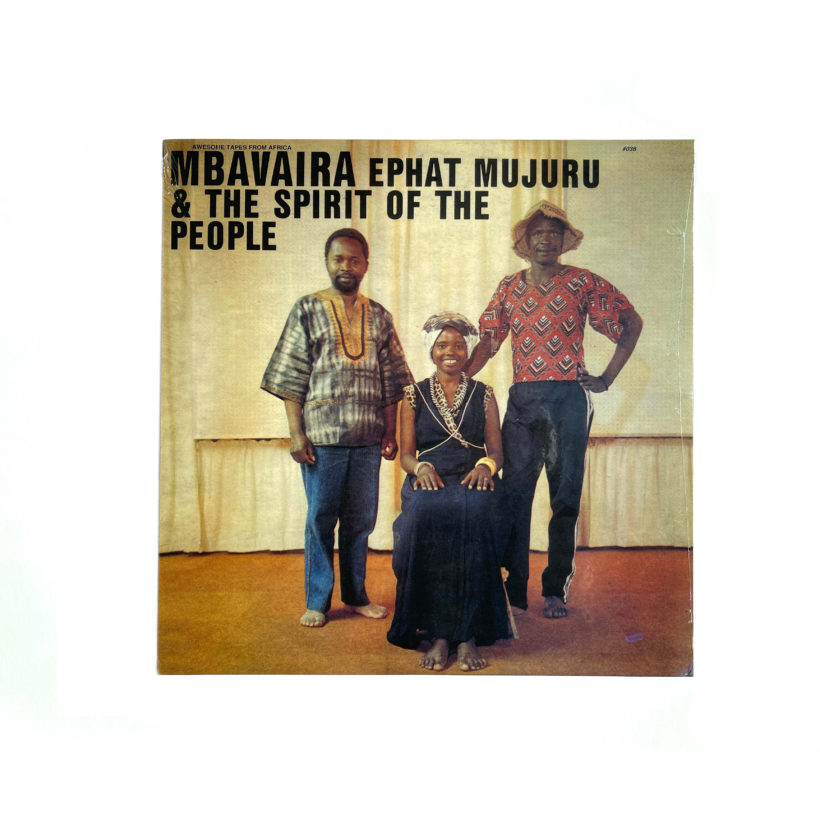 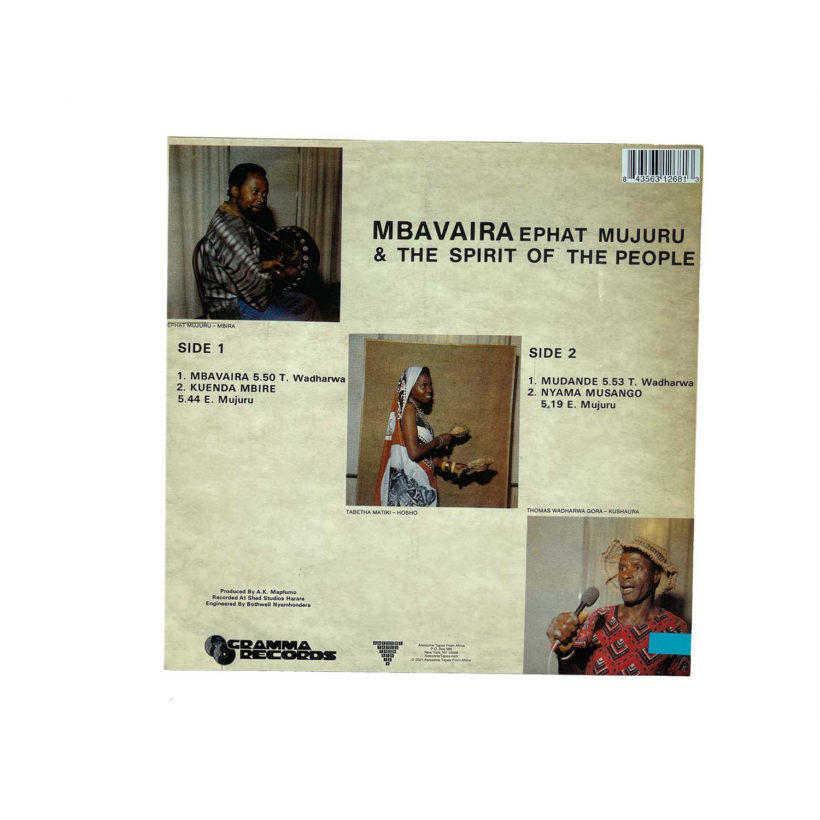 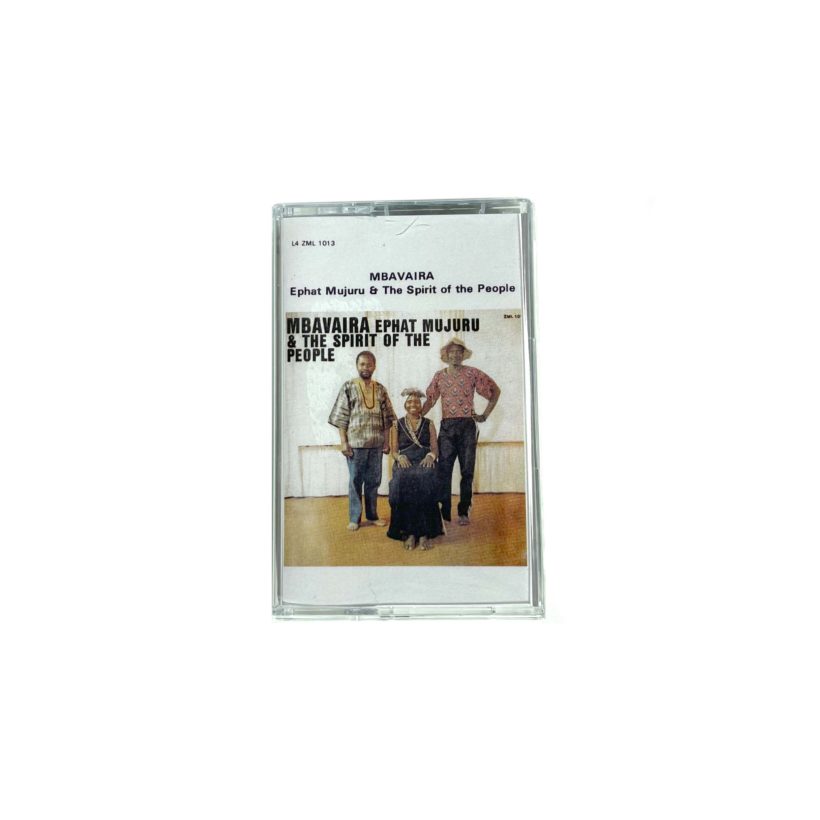 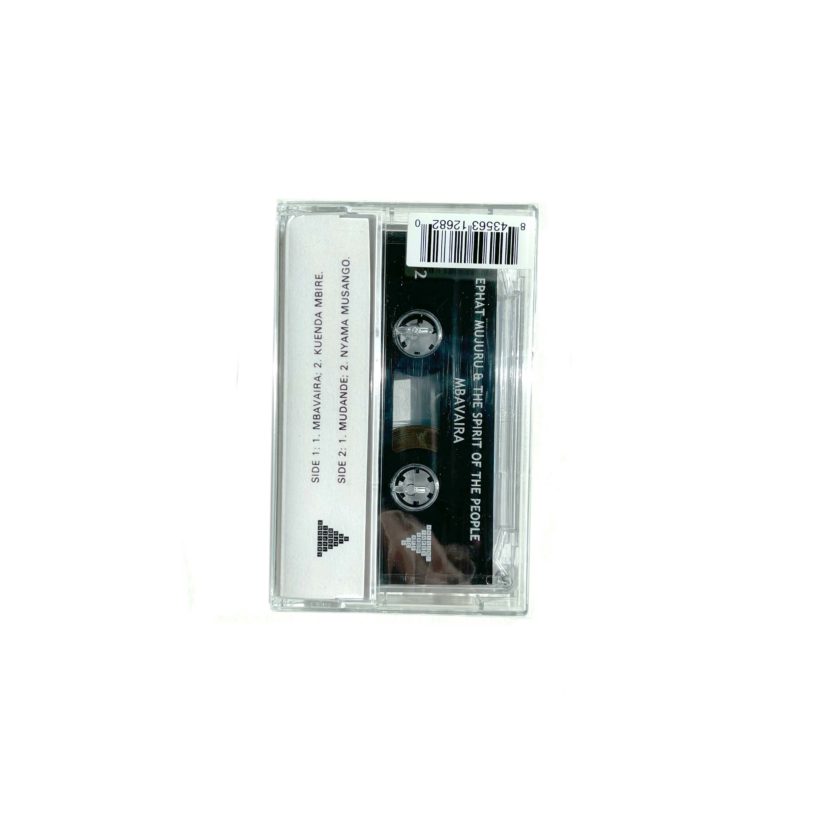 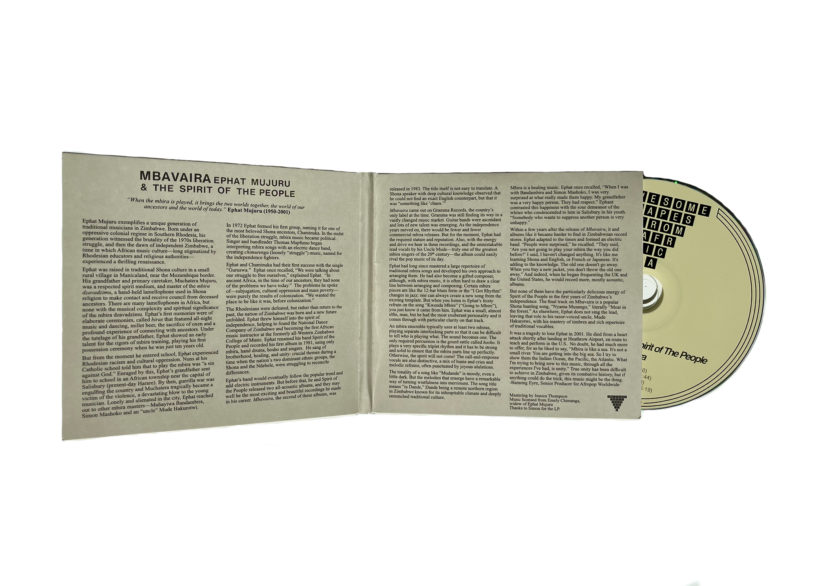 “When the mbira is played, it brings the two worlds together, the world of our ancestors and the world of today.” Ephat Mujuru (1950-2001)

Ephat Mujuru exemplifies a unique generation of traditional musicians in Zimbabwe. Born under an oppressive colonial regime in Southern Rhodesia, his generation witnessed the brutality of the 1970s liberation struggle, and then the dawn of independent Zimbabwe, a time in which African music culture—long stigmatized by Rhodesian educators and religious authorities—experienced a thrilling renaissance.

Ephat was raised in traditional Shona culture in a small rural village in Manicaland, near the Mozambique border. His grandfather and primary caretaker, Muchatera Mujuru, was a respected spirit medium, and master of the mbira dzavadzimu, a hand-held lamellophone used in Shona religion to make contact and receive council from deceased ancestors. There are many lamellophones in Africa, but none with the musical complexity and spiritual significance of the mbira dzavadzimu. Ephat’s first memories were of elaborate ceremonies, called biras that featured all-night music and dancing, millet beer, the sacrifice of oxen and a profound experience of connecting with ancestors. Under the tutelage of his grandfather, Ephat showed an early talent for the rigors of mbira training, playing his first possession ceremony when he was just ten years old.

But from the moment he entered school, Ephat experienced Rhodesian racism and cultural oppression. Nuns at his Catholic school told him that to play the mbira was “a sin against God.” Enraged by this, Ephat’s grandfather sent him to school in an African township near the capital of Salisbury (present-day Harare). By then, guerilla war was engulfing the country and Muchatera tragically became a victim of the violence, a devastating blow to the young musician. Lonely and alienated in the city, Ephat reached out to other mbira masters—Mubayiwa Bandambira, Simon Mashoko and an “uncle” Mude Hakurotwi.

In 1972 Ephat formed his first group, naming it for one of the most beloved Shona ancestors, Chaminuka. In the midst of the liberation struggle, mbira music became political. Singer and bandleader Thomas Mapfumo began interpreting mbira songs with an electric dance band, creating chimurenga (loosely “struggle”) music, named for the independence fighters.

Ephat and Chaminuka had their first success with the single “Guruswa.” Ephat once recalled, “We were talking about our struggle to free ourselves,” explained Ephat. “In ancient Africa, in the time of our ancestors, they had none of the problems we have today.” The problems he spoke of—subjugation, cultural oppression and mass poverty—were purely the results of colonization. “We wanted the place to be like it was, before colonization.”

The Rhodesians were defeated, but rather than return to the past, the nation of Zimbabwe was born and a new future unfolded. Ephat threw himself into the spirit of independence, helping to found the National Dance Company of Zimbabwe and becoming the first African music instructor at the formerly all-Western Zimbabwe College of Music. Ephat renamed his band Spirit of the People and recorded his first album in 1981, using only mbira, hand drums, hosho and singers. He sang of brotherhood, healing, and unity: crucial themes during a time when the nation’s two dominant ethnic groups, the Shona and the Ndebele, were struggling to reconcile differences.

Ephat’s band would eventually follow the popular trend and add electric instruments. But before that, he and Spirit of the People released two all-acoustic albums, and they may well be the most exciting and beautiful recordings he made in his career. Mbavaira, the second of these albums, was released in 1983. The title itself is not easy to translate. A Shona speaker with deep cultural knowledge observed that he could not find an exact English counterpart, but that it was “something like ‘chaos.’”

Mbavaira came out on Gramma Records, the country’s only label at the time. Gramma was still finding its way in a vastly changed music market. Guitar bands were ascendant and lots of new talent was emerging. As the independence years moved on, there would be fewer and fewer commercial mbira releases. But for the moment, Ephat had the required stature and reputation. Also, with the energy and drive we hear in these recordings, and the unmistakable lead vocals by his Uncle Mude—truly one of the greatest mbira singers of the 20th century—the album could easily rival the pop music of its day.

Ephat had long since mastered a large repertoire of traditional mbira songs and developed his own approach to arranging them. He had also become a gifted composer, although, with mbira music, it is often hard to draw a clear line between arranging and composing. Certain mbira pieces are like the 12-bar blues form or the “I Got Rhythm” changes in jazz: one can always create a new song from the existing template. But when you listen to Ephat’s feisty refrain on the song “Kwenda Mbire” (“Going to Mbire”), you just know it came from him. Ephat was a small, almost elfin, man, but he had the most exuberant personality and it comes through with particular clarity on that track.

An mbira ensemble typically uses at least two mbiras, playing separate interlocking parts so that it can be difficult to tell who is playing what. The sound becomes one. The only required percussion is the gourd rattle called hosho. It plays a very specific triplet rhythm and it has to be strong and solid to ensure that the mbira parts line up perfectly. Otherwise, the spirit will not come! The call-and-response vocals are also distinctive, a mix of hums and cries and melodic refrains, often punctuated by joyous ululations.

The tonality of a song like “Mudande” is moody, even a little dark. But the melodies that emerge have a remarkable way of turning wistfulness into merriment. The song title means “in Dande,” Dande being a remote northern region in Zimbabwe known for its inhospitable climate and deeply entrenched traditional culture.

Mbira is a healing music. Ephat once recalled, “When I was with Bandambira and Simon Mashoko, I was very surprised at what really made them happy. My grandfather was a very happy person. They had respect.” Ephant contrasted this happiness with the sour demeanor of the whites who condescended to him in Salisbury in his youth. “Somebody who wants to suppress another person is very unhappy.”

Within a few years after the release of Mbavaira, it and albums like it became harder to find in Zimbabwean record stores. Ephat adapted to the times and formed an electric band. “People were surprised,” he recalled. “They said, ‘Are you not going to play your mbira the way you did before?’ I said, I haven’t changed anything. It’s like me learning Shona and English, or French or Japanese. It’s adding to the knowledge. The old one doesn’t go away. When you buy a new jacket, you don’t throw the old one away.” And indeed, when he began frequenting the UK and the United States, he would record more, mostly acoustic, albums.

But none of them have the particularly delicious energy of Spirit of the People in the first years of Zimbabwe’s independence. The final track on Mbavaira is a popular Shona hunting song, “Nyama Musango,” literally “Meat in the forest.” As elsewhere, Ephat does not sing the lead, leaving that role to his razor-voiced uncle, Mude Hakurotwi, with his mastery of timbres and rich repertoire of traditional vocables.

It was a tragedy to lose Ephat in 2001. He died from a heart attack shortly after landing at Heathrow Airport, en route to teach and perform in the U.S.. No doubt, he had much more to offer, for as he liked to say, “Mbira is like a sea. It’s not a small river. You are getting into the big sea. So I try to show them the Indian Ocean, the Pacific, the Atlantic. What I’m trying to bring now to this music, through all the experiences I’ve had, is unity.” True unity has been difficult to achieve in Zimbabwe, given its combative history, but if anything could do the trick, this music might be the thing.