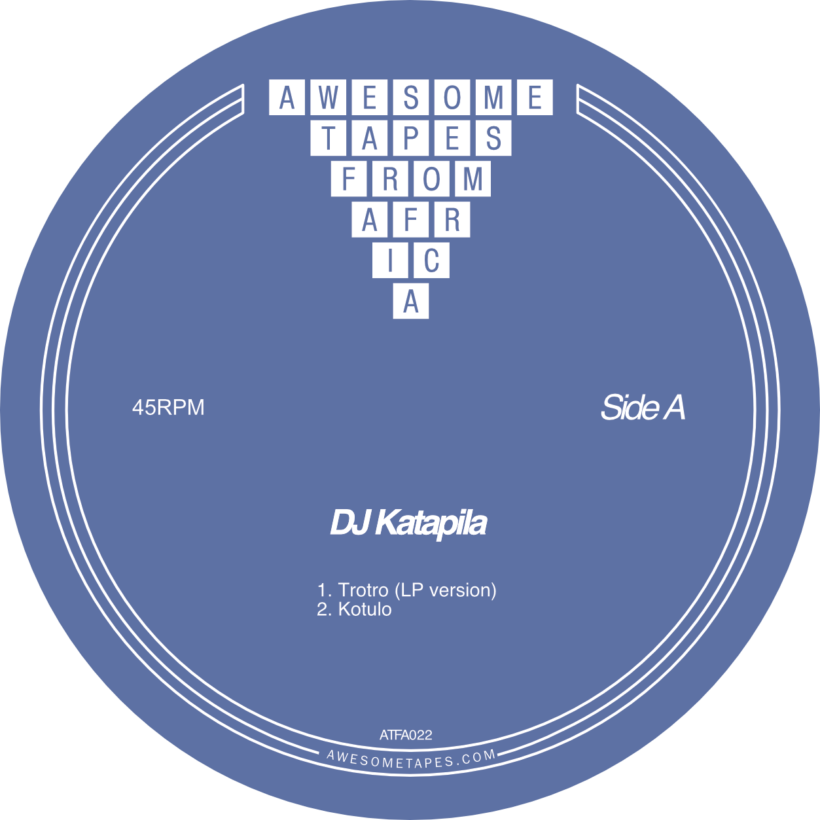 12″ single of DJ Katapila’s intense production that somehow weds Ghanaian dance music with the sounds of neighboring countries with a techno and footwork aftertaste.

There’s no other producer in West Africa like DJ Katapila. His album Trotro, reissued in March on Awesome Tapes From Africa, demonstrates a wild combination of breakneck rhythms steeped in his native Ga traditional dances. But the spiritual affinity his music share with the minimal sounds of early house and techno have not gone unnoticed by listeners worldwide. Ghana’s tireless producer and DJ, aka Ishmael Abbey, singularly consolidates flavors. As new sounds wind their way from West African neighbors into urban Ghana—particularly the hectic and humid metropolis Accra—Katapila has absorbed and analyzed their insidious influence on local dancers and filtered them into his own works. The result is astonishing.

Two of the tracks here haven’t been on wax before. This 12” single made specially for DJs and collectors adds to the lore of Katapila’s days-long DJ sets and intensely original and (slightly bananas) FruityLoops-crafted minimalist productions. The two previously-unreleased tracks build on Katapila’s international oeuvre significantly, painting a broader picture of what the iconoclastic road warrior dj-producer has been doing the past few years: making his own kind of electronic music that’s both deeply personal and wildly international.

The multi-layered vocal madness on the original mix of Katapila’s song “Trotro” gives way to the previously-unreleased “Kotulo.” On this track, Katapila interlocks the iconic 808 cowbell sample with his inimitable toasting and you can see this track tectonically disturbing a dance floor. The B-side features “Trotro (Instrumental),” honing in on the sonic details that make Katapila’s ode to Accra’s intense public transport system so compelling. Second unreleased track, “Gbe Ohe Coco,” pushing the boundaries of his extant works with relentless layer after layer building on top of relentless techno. As with all of his songs, Ghanaian traditional dance rhythms form the backbone, as the undulating toms subtly create movement towards an imaginary horizon at the edge of the party.