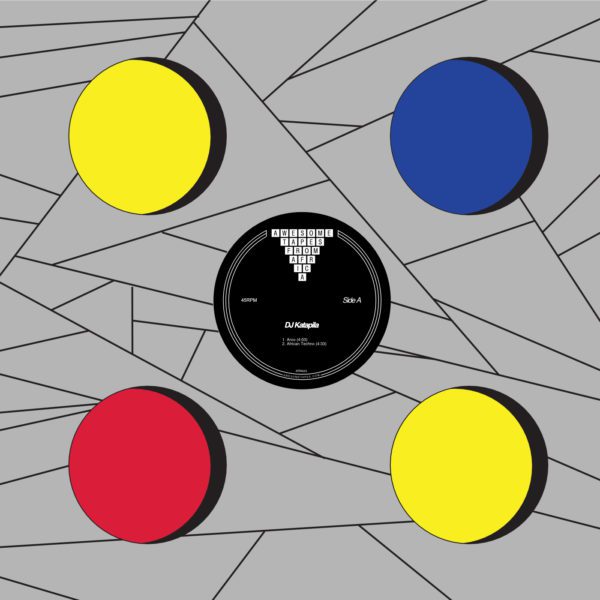 DJ Katapila’s debut release with Awesome Tapes From Africa, 2016’s reissue of Trotro, ignited international acclaim for the Ghanaian DJ and producer: The New York Times, Pitchfork, Resident Advisor and FACT heaped praise on his work. Katapila launched a touring career beyond his grueling schedule of all-night parties around Ghana’s southern coast and neighboring countries, heading to Europe and the UK, where he performed at festivals and clubs the past two years. Katapila brought Ghana’s street party culture to audiences overseas; a wave of joy and happy dancers were left in his wake.

The song “Aroo” uses his earlier song “Cocoawra” as a jumping off point and expands upon its endearing quick-rhythmed interplay of vocal hiccups and percussive clinks. Katapila thinks of “Aroo” as a simple math equation: “Francophone rhythms plus techno equals so hot and danceable.”

While traveling this past summer in Europe, he continued to work on the minimalist electronic music steeped in his hometown rhythms that has made him a growing and singular voice in West African music. Having never traveled outside his region before, the contemporary sounds of London impacted his sonic palette, triggering new song “African Techno.” He explains, “In Europe and the UK they like these techno songs and house music. They have songs that sound like African music, and we have songs that sound like house music and techno music.”

“Ghana Baby DJ” references his ongoing development of Ga dance music style gbe ohe. It also conjures his daughter’s voice and inimitable vibe and blends it with the characteristic clave rhythm of this .
The EP’s final cut is a track released with a an eye-catching music video this summer called “Monkey.” Following radio play in Ghana and demand from fans online, this track makes it debut on vinyl.

Awesome Tapes From Africa is proud to present new music from this unmistakably original artist with an honesty and unpretentiousness that feels good at this current point in history.