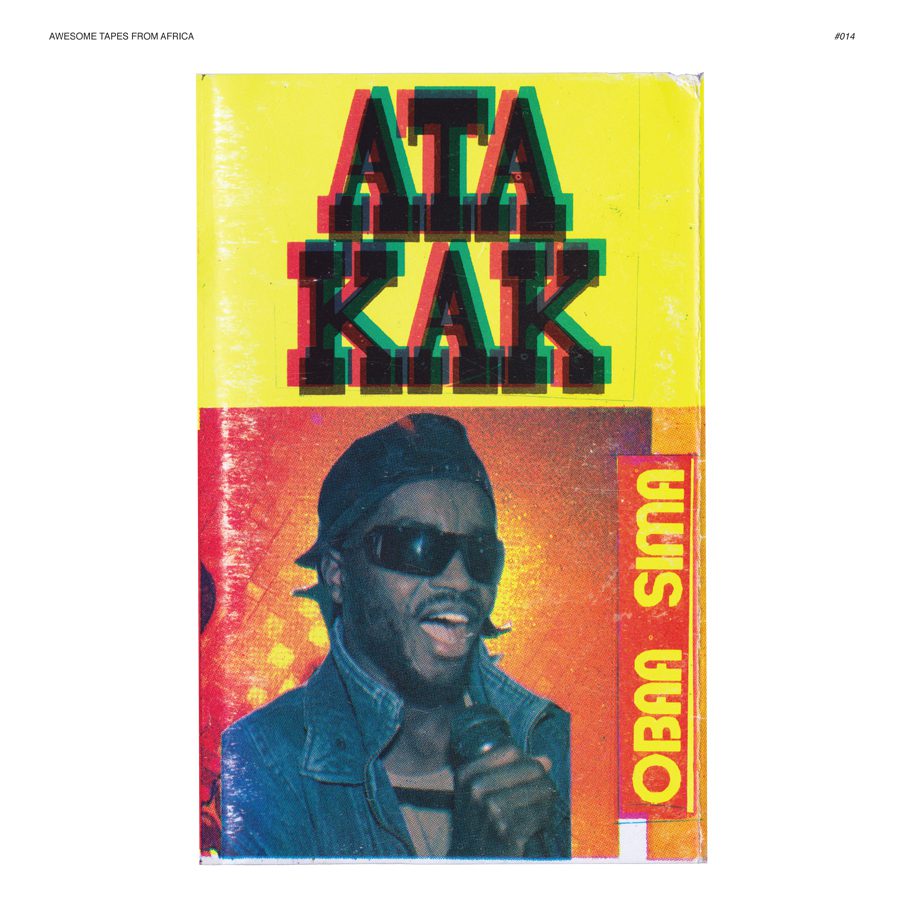 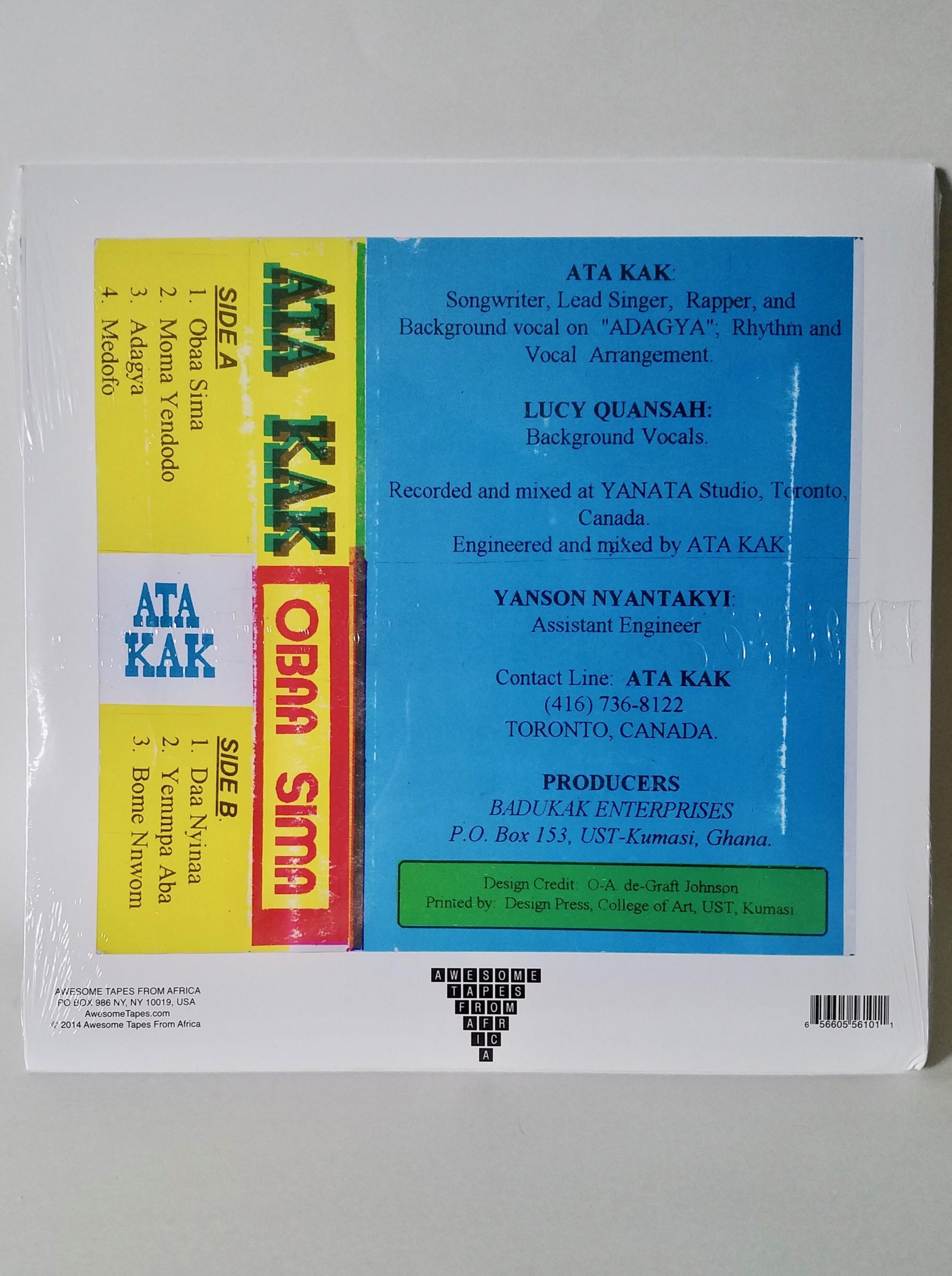 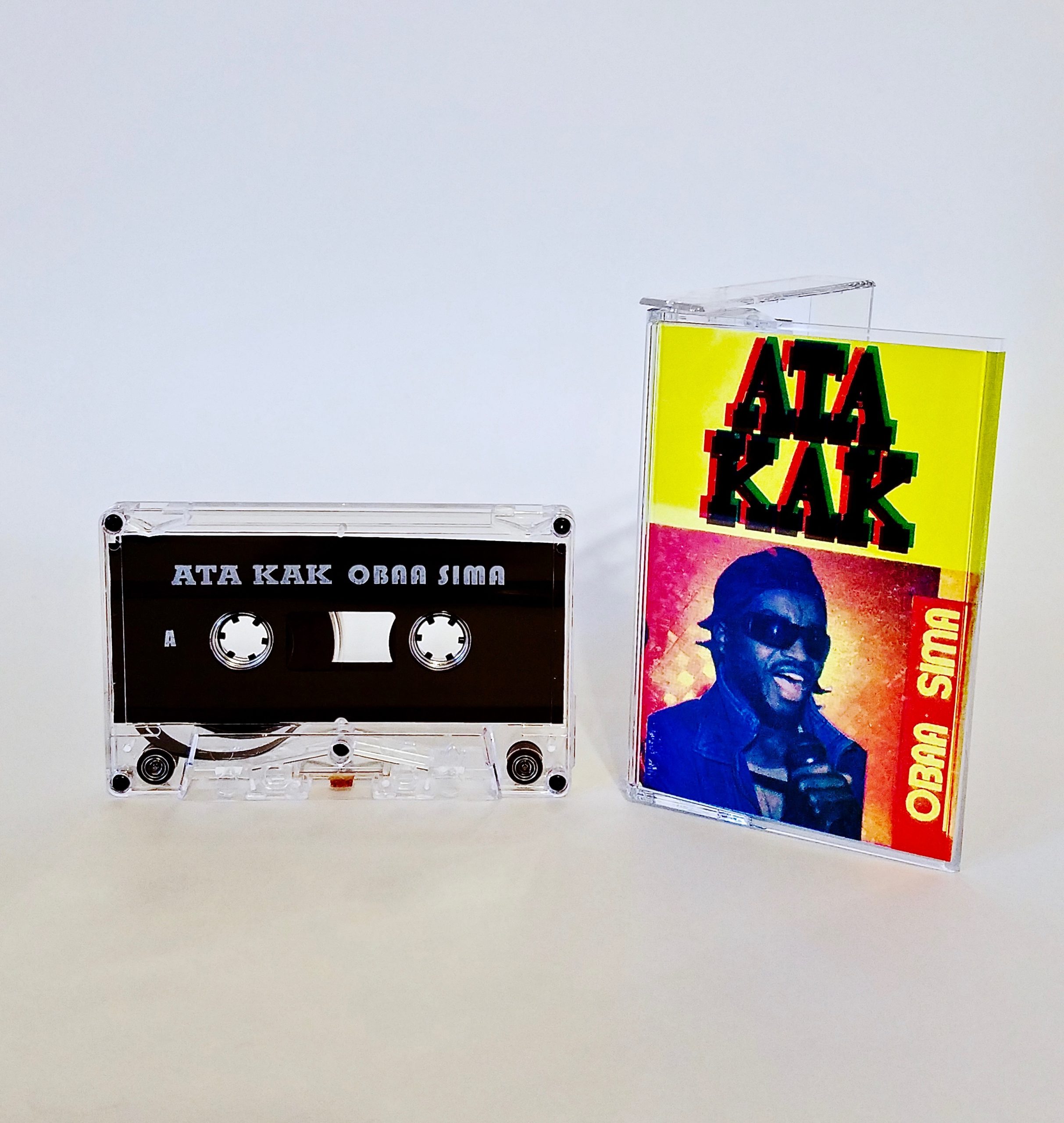 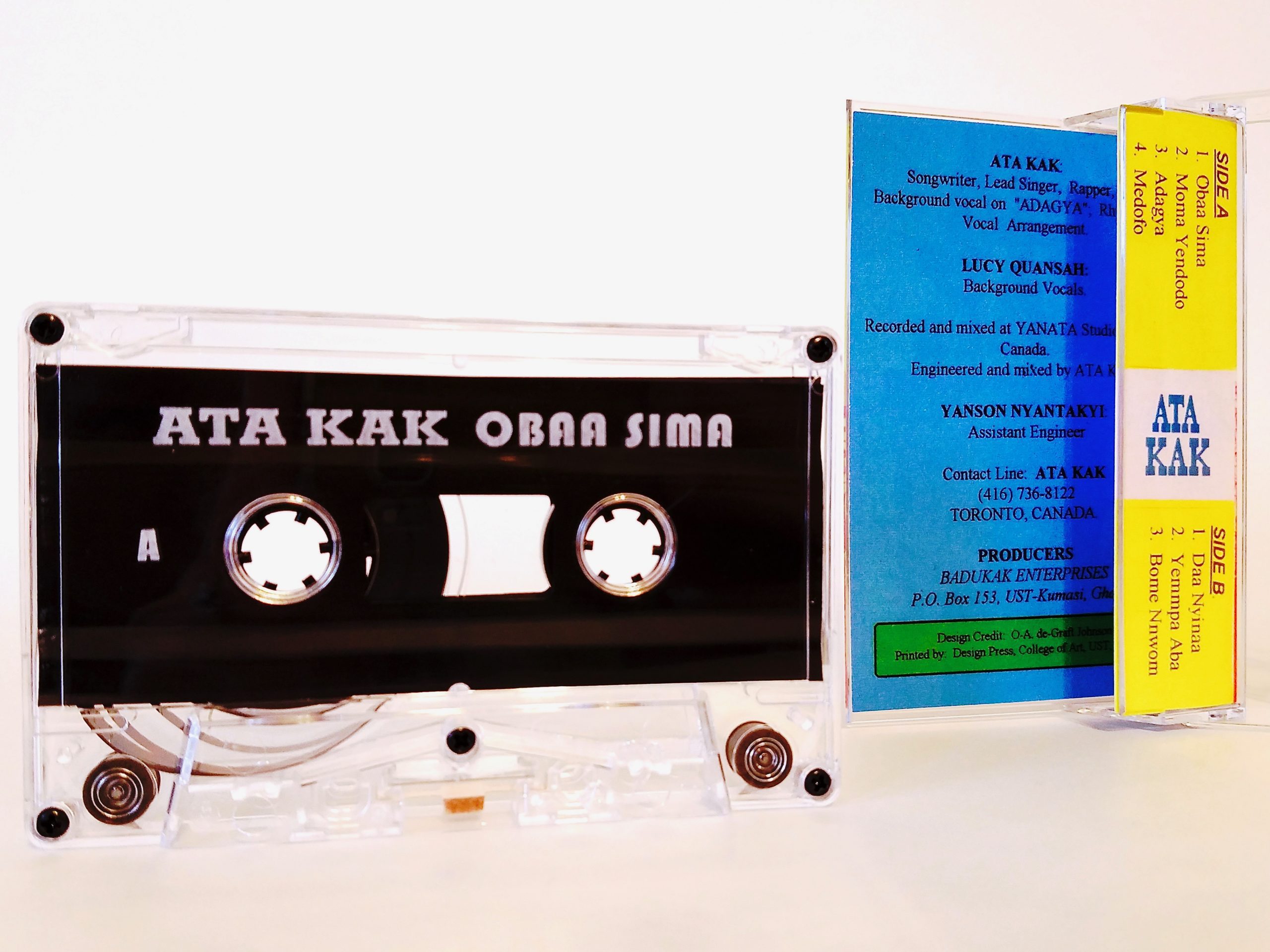 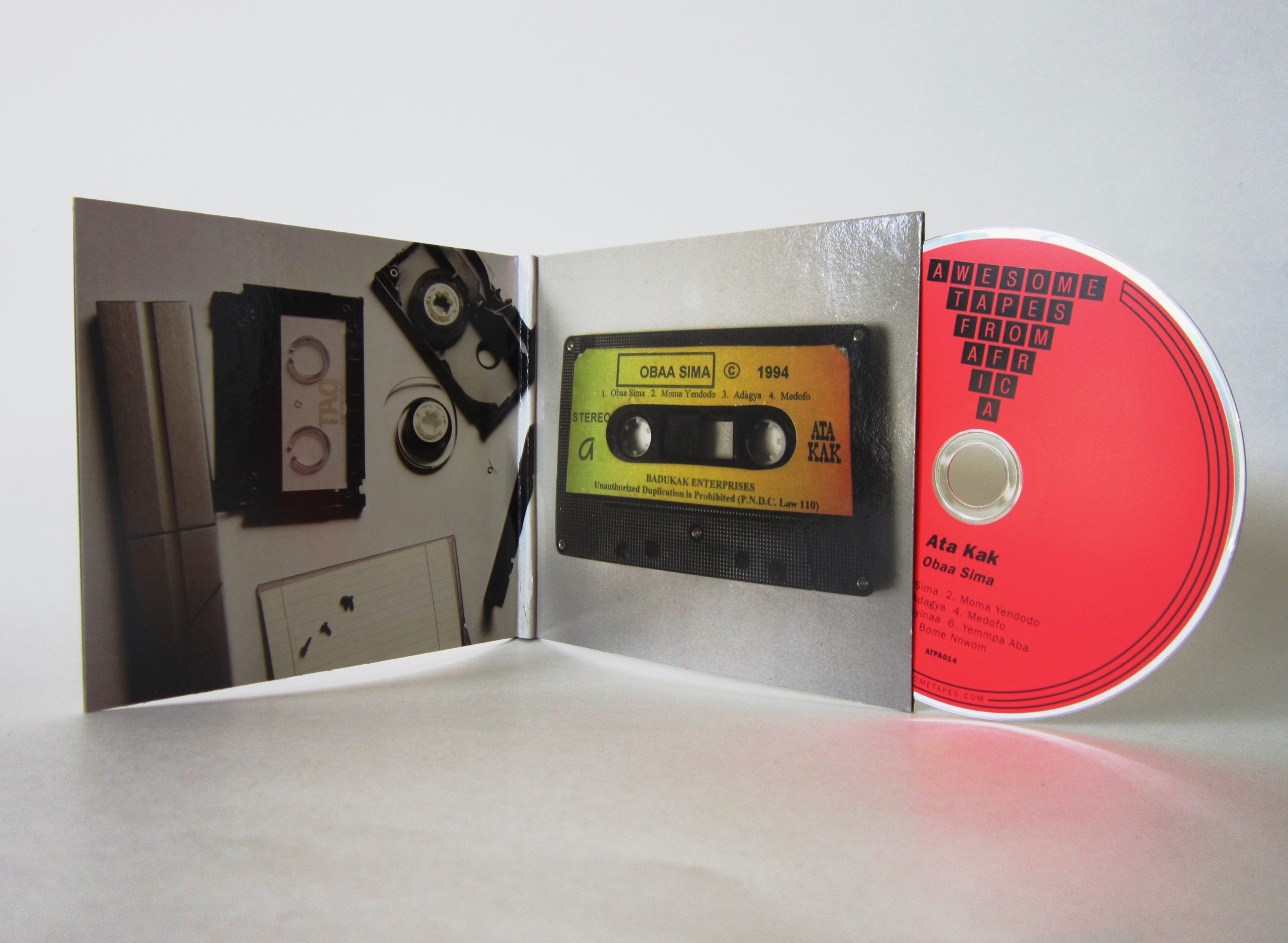 LP of the long-awaited pressing of this cult favorite from 1994, recorded in Toronto, released in Ghana.

Born September 29, 1960 in Kumasi, Ghana, Yaw Atta-Owusu didn’t seem to have music in his future. After attending AME Zion Mfantsipim Senior High School and managing the bar at the Kumasi Golf Club, he lived with his father for several years before moving to Germany in 1985 to join his wife, Mary. For 9 months he took German classes and planned to attend university but his wife got pregnant with Kevin, their first son. Living near Dortmund, Atta worked as a day-laborer, farmhand and English teacher, but he was also absorbing Stevie Wonder, the Staples Singers, KC and the Sunshine Band, Michael Jackson and the disco movement.

Living in Germany opened new doors for Atta. Landing somewhere between Dortmund and Düsseldorf, he discovered work opportunities, made some friends and he was introduced to playing music for the first time. From a young age, he loved to dance and listen to music but never had the means to pursue it. It wasn’t until a German guy approached him at the post office and asked if he knew how to play. Atta fibbed and told him he could play drums—though he’d never played in his life. (His wife thought he was nuts!) The band got together and Atta joined on drums, and he was predictably terrible. After five weeks of rehearsing though, with Atta mastering drums and very soon lead vocals as well, he learned to jam on the band’s repertoire of reggae covers. Increasingly confident with his self-taught skills, Atta was an active musician for the reminder of his time in Germany.

Atta moved to Toronto in 1989 where he was invited to play in a highlife band. Although highlife had been the dominant musical genre in Ghana during his youth, he hadn’t actually played it. Unhappy at first—he preferred reggae—he picked up highlife quickly. He played drums for the band Marijata (not related to the other Marijata from 1970s Ghana), which rehearsed in a basement on the edge of town. They played shows around Canada and released three albums. The group featured Agyemang Opambuor (vocals and lead guitar), Marshal [Atta can’t recall his last name] (keyboard) and Anthony Frimpong (bass). His highlife influences spanned the classics—C.K. Mann, Nana Ampadu—but he also had James Brown, Elvis Presley and the Bee Gees on his mind in his approach to Ghanaian pop music. All the while, Atta taught music lessons at church and worked primarily as chief cook at a condiments factory in Bolton, Ontario.

Around December 1991, Atta decided to record his own songs. But he felt his bandmates could not (or would not) perform the new style he envisioned. Lacking the cash for studio time, he cobbled together his own using mostly second-hand equipment: a computer with Atari Notator software; a new synthesizer with built-in drum sounds; a reel-to-reel recorder; a 12-channel mixer. It took a long time to gather equipment, learn how to use it and finally record the new songs that Atta had found so easy to write.

He and his friend Yanson Nyantakye (who contributed technical expertise as assistant engineer) laid down the tracks, slowly. Yanson originally sang backing vocals but Atta replaced his voice with that of Lucy Quansah, whose brother was a bass player friend of Atta’s. In apartment 617 at 215 Gosford Blvd, as his infant son Jeffrey looked on, Atta occupied the living room and washroom to record what would become Obaa Sima.

The seven tracks on Obaa Sima traverse a pop music landscape that encapsulates international modes–rap, techno, saccharine melodies—while reflecting contemporary Ghanaian music via highlife-style refrains, aggressive rapping and use of Twi language. Inspired by a Grand Master Flash & The Furious Five performance of “New York New York” he saw on television, Atta wanted to rap on his new project. (Melle Mel’s look on a 1983 German TV performance of the song bares an uncanny resemblance to Atta’s image on his cassette cover.) He was not aware of the hiplife—localized rap—movement in Ghana, in its very infancy by 1994 when Obaa Sima was released. Rapping in English didn’t feel comfortable and he began writing and practicing rhyming in Twi, the most widely-spoken language in Ghana. The distinctive rapping on Obaa Sima became one of the earliest and most intrepid examples of Twi rap in a period when young rappers in Accra and Kumasi were still mimicking Tupac and Shaggy.

The name Ata Kak came from the fact that he was born a twin, which in Akan society usually means one child is named Atta (or Ata) and the other child is named Ataa. He shorted his first name and added Kak, which is short for kaakra, meaning “small,” often added to the name of the younger twin. It proved costly to manufacture the tape in Toronto, so he sent it to Ghana to be mastered and duplicated. His twin brother organized the cassette cover design with help from Professor O.A. DeGraft Johnson, head of the publishing department at the local university. Atta loved the artwork. Around 50 copies were made and released in 1994. They were testing the market with the initial pressing but no one showed interest. DJs wanted cash to play it. He couldn’t invest in promoting it. Atta never once played it for anyone in Ghana and has never heard anyone talk about it. He believes approximately 3 copies were sold and the rest were scattered among family and friends in Ghana and Canada. A group of friends in Toronto for whom he played it loved the recording, but it didn’t make an impact in Ghana.

Awesome Tapes From Africa founder Brian Shimkovitz bought a copy of Obaa Sima in a roadside stall in Cape Coast, Ghana in 2002. The tape sat in a box for a few years and, following a year-long return trip to Ghana, it became the inspiration for the ATFA blog in 2006. Soon a cursory search for Ata Kak began, with Google and endless phone calls providing no leads. As the search became more serious, and obsessive curiosity built, there were still zero clues among Ghanaian friends, acquaintances and music industry professionals, who had never heard of Ata Kak.

In October 2006, Atta moved back to Ghana, where he invested in a well-digging business. The machinery broke down and led to a failure of the business, which has prevented him from further focusing on music. Back in Kumasi today, Atta continues to write songs for his own enjoyment.

After 20 years, Atta’s master DAT of the recording degraded in Ghana’s heat and humidity. It split apart when digitization began and the music could not be recovered. With Atta’s only cassette copy too stretched out and sonically-damaged to use—over time, other copies were found but didn’t sound good enough—the original tape Shimkovitz found in 2002 became the source for this release. Jessica Thompson at the Magic Shop in NYC transferred, cleaned up and otherwise restored the sound. Mysteriously, Atta’s original recording was slower than the one ATFA posted (indicating the album might have been pirated at some point). This release maintains that faster sound almost everyone except Atta is used to, mostly because slowing down the faster version revealed too many sonic problems. So a download is included so everyone can hear both versions.