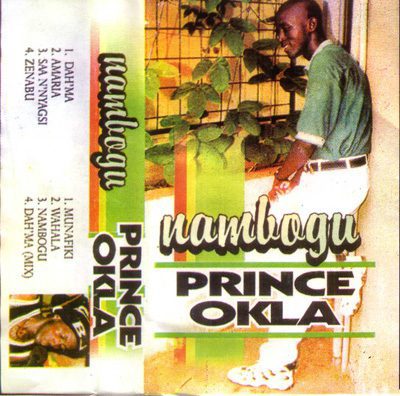 Prince Okla and Sheriff Ghale are from Tamale, in northern Ghana. My friend Joshua and I were there and wanted to find local musicians. Our first day in town we met a kid named Rashid who said he’d help us find some people. Rashid took us to meet some guys who, according to him, were some of the key players in the Tamale music scene. We ended up at a barber shop that belonged to a Dagbani-language reggae singer named Shoeshine Boy. Rashid sent for other musicians. Prince Okla appeared with a couple friends. Soon we were a largish group, awkwardly talking about music in this tiny shack of a barber shop. Prince Okla mentioned Michael Jackson and Tupac. We later went to Sheriff Ghale’s house and sat with him for a while. They were all extremely kind.

The first track here kind of reminds me of freestyle, only with a deep-voiced Dagomba dude singing instead of your favorite Miami princess. The second track is a good example of the local reggae Tamale folks seem to enjoy. The dissonance here is particularly enjoyable. This might be considered old school by the youngsters. Okla is part of the first wave of modern Tamale pop acts who began to emerge in the mid-90s and this recording is from maybe 2000. He is by no means the leader. I just like these two somewhat bizarre tracks.

A wall mural in Tamale

While I was most interested in the town’s local rap movement, it is reggae that has put Tamale on the Ghanaian musical map. Sheriff Ghale—schoolteacher by day, Northern Ghana reggae luminary by night when I met him in 2002—won the Ghana Music Award for “Best Reggae Artiste” a couple years ago. Ever since then, folks way down south in the country’s capital Accra have had reason to give Tamale’s formerly invisible music scene a second look.

That Gale song would be so sick if he could re-record it with a live band. I have always loved that guitar lick he uses…

i agree. most of this music would be waaay better if they had the opportunity to use a live band. northern ghanaian is still tops, though.

this music is great. I think more dagbani/ Northern songs should be put online. thanks to this website.

I would like to get some cd of Prince Okla. I don’t know where to get them. I heard of him in Burkina Faso, last week, in a bus.

We offer the farouk chi flat iron. We provide the best price and free shipping for all the
chi flat iron. As we know, the
ghd iv styler is the first class and famous brand. So it is the good chance for you. Don’t let it pass. If you are looking for the
babyliss flat iron, you have come to the right place for
instyler rotating hot iron.

hello alright, it is possible to make the audio available?
or how much do you want for the cassette?