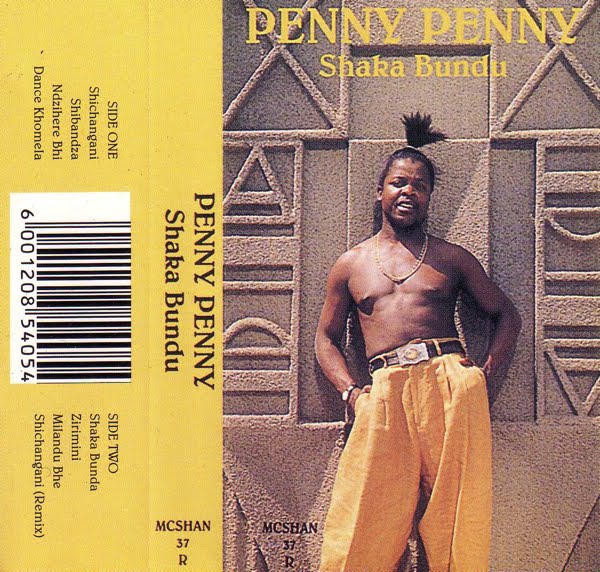 Penny Penny hails from 1994 South Africa. Shaka Bundu contains simple yet deep synth-pop anthems that couldn’t give a fuck if you thought they sounded corny at first. It’s that kind of tape. And this music, a more pop-leaning side of Tsonga (or Shangaan) Disco, feels as if Fast Eddie hijacked the regional neo-traditional sounds. WBMX by way of Transvaal.

The world we live in now is an awesome one. For evidence look at this blog devoted entirely to Tsonga Disco.

The remarkable story of South African singer and dancer Penny Penny is fit for Hollywood. A nearly homeless janitor without formal education gets a record deal, becomes a multi-platinum selling pop star, plays stadiums across Africa, then builds a career as a popular politician for Nelson Mandela’s African National Congress party. His debut recording Shaka Bundu, recorded in 1994, is the album that launched a 34-year-old Giyani Kulani Kobane from the streets of Johannesburg to the national political spotlight.

Penny Penny is a Tsonga who hails from the Limpopo Province in Northeast South Africa, near the border with Mozambique. Born in 1960, he was the last of his father’s 68 children. A 2.1-meter (6’10”) tall traditional healer (sangoma), Penny’s father had 25 wives and was well-respected in the region. He lived a long life and passed away in 1966.

(Thanks to Wills and Tshepang for this cassette.)

Nice to see some Shangaan disco up here, kudos to my friend Tshepang and Wills who I met when he was in SA. So much more to explore in this genre guys from early 80s roots shangaan to the dance tracks like these!

We were shopping for tapes in downtown Jozi and I thought this one was perfect for your site. So great to see it posted. Thanks!!!

More and more exciting album to come. We like it.

PS- check out my music blog whenever you get a chance.
wildanimaltats.wordpress.com

imp!! for the blog/website owner
share my blog with your readers and then i will share your blog with my readers

havn’t seen one of his tapes in years, I used to live in RSA back then.

thanks for posting something in Tsonga!! just got back from a trip to the northeast corner of South Africa and loved the people, language, and music. its nice to still be able to hear it.

hey can u make videos of shangaan music please

hi im based in England and im looking all Penny Penny albums and Chicco Twala where can i find them online its very hard to find african music in England and anyone who have ideas can you please e mail me on anthonym1205@gmail.com thanxs

Thanks for the Penny Penny! Do you have any Peta Teanet?

DUUUUDE! youve no idea how you made my day with that penny penny. some shangaan dopeness that takes me back to my high school days back home in mpumalanga. What youre missing though are his two eponymous signture hits: BUM BUM & the self-titled PAPA PENNY! Everyone knows those 2 songs, even the hardcore local hip hop guys jammed that! :-) If youre interested i could pop down to a cd/tape merchant out here in johannesburg (theyre really good with the classics) and see if they have it. I still remember hopping off the school bus in my home town and watching a street concert with PENNY PENNY himself at the height of his fame in the early 90’s, ahhh shangaan disco; Takes me back!

Eddyreply
– In reply to: Anonymous

Please do and please can i have their contacts

Please post locations of some downtown stores where one can find this and the like… I heard there is a good store opposite Truworths on Eloff… any others?!

Penny Penny was one of the early artist during the beginnig of the Kwaito scene during the late 80s and ealy 90s. Even though he was considered “Shangaan (Tsonga) Disco” it still remains a Kwaito classic.

Thank you for the Penny Penny music! I remember as a teenager in Sierra Leone he came to perform we couldn’t get in it was so packed. I brought the album with me to the U.S. Figuring I could easily get a replacement I gave it to a friend who heard me play it and kept asking to borrow it, and on two subsequent trips home I bought the album again each time -and ended doing the same thing for other friends. Since then I haven’t been able to find this music anywhere. You have no idea how much you just made my day! Thank you!

How would I be able to get this my search got me here yet I don’t know how to get this songs on here. Am from Sierra Leone I remember when I was little boy begging my to play them. She’ll say ”if you don’t do this, I won’t play Shaka Bundu” as we knew him then. Gosh(tears).

I can’t believe nobody has brought up how incredibly solid the saxophone work is on this album. What a boss.
One of my fave albums on here for sure.

I have all albums for penny penny ,pamela nkhuta chicco selo thwala and peter teanet may his soul rest in peace and I can’t sleep without playing this wonderful music Benjamin mwanja nick named magubane because I use to play this album for papa penny and all the neighbours enjoyed the music

I just want the Milandu Bhe lyrics. I love that song.

I love this songs, but cant be able to fine others like-ingani, orillia etc