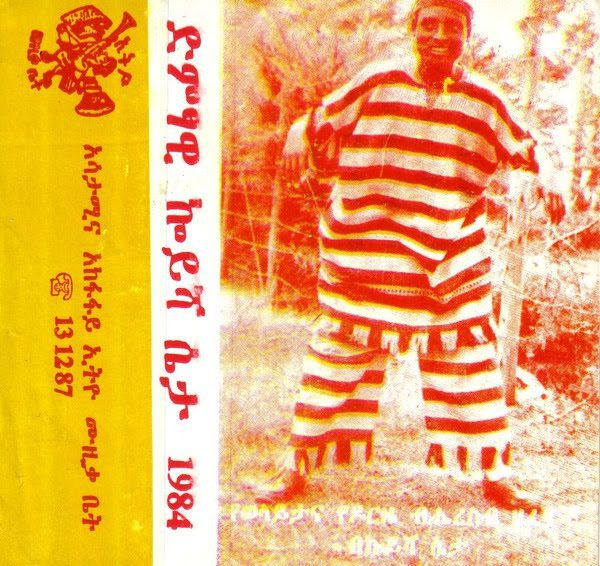 This tape from Ethiopia is full of left-field soulful insanity, the kind for which I live. Track 2 is straight disco magic, Track 4 is slippery and unreal. Can’t figure out wtf is going on with Track 5. Every song is thoroughly worth it, jams all of them. Doing this blog might never get old if I keep coming across gems like this.

BTW: The Fader just posted a funny video of me jabbering on about tapes and such.

The spine of the cassette reads “ድምፃዊ ኰይሻ ሴታ” as far as I can tell, I can’t read Amharic! (You might need a font to read that… Abyssinica SIL is free.)

I put these into an online dictionary and the first word means “singer”, so maybe the rest is his name?

The syllables for the second two words are something like “kwa-ye-shaa see-taa”, but that’s just going by the Unicode summaries of the characters.

have you tried ringing up the phone number on the cover?

It’s Wolaita, but I have never heard of the guy…I sent off a query to someone who might know!

the keyboard used for the backgrounds is a yamaha psr-47!

Absolute MAGIC, this is brightening up a very dreary, dull and thoroughly grey English Saturday afternoon.

From a more informed friend:

I never heard of the singer, Koysha Seyta, nor had the most knowledgeable American on the subject I know. He looked into it a bit and learned that he is a Wolaita, a southern ethnic group, the songs are in Wolaitegna. Some Ethiopian musicians in the US know of him, but none seem to know his music well. Whether that’s a comment on their opinion of the music, or his popularity, or that he may simply be one of those singers who didn’t make it big in his time and is possibly being ‘discovered’ now, or any other scenario you can think of…who knows?

I have some great Zambian music from some very talented and inspiring artists. Would you be interested in posting it on your blog to share with everyone? I’ve been trying to help them get their name out their in any way possible.
– Sarah

I have some great Zambian music from a few very talented and inspiring artists. Would you be interested in posting it on your site to share with everyone? I’ve been trying to help them get their name out their in any way possible.

this shit is beyond #based

trying throwing the album out on some torrent sites with things like “World Music” and “African Music” in the title. people will download it. http://www.thepiratebay.org is a good one that gets a lot of traffic. I upload plenty of foreign music and it gets lots of downloads.

Awesome cool indeed. I adore this blog precisely because of stuff like this. Thanks for sharing all this wonderful music–and for sharing the Fader vid! Great fun and an important document of what you do too.

I stumbled upon your blog while looking for some African tunes, and I must say, you’ve found some really awesome stuff.
I saw this S. African movie with a great soundtrack called “White Wedding,” causing a shift in my regular music tastes. Check it out! http://whiteweddingmovie.com/

His name is Kayesha Seta, he is still alive but not doing music any more.

Track 5 is awesome. Thank God for the crazy people who make this music! Woah… now I am currently halfway through Track 6, and it is blowing my mind.

This is Malene, whp gave you the tape in Copenhagen.

The musicians name is Kayesha Seta. When I showed the tape to my friends in Addis Abeba, they told me that he is still alive and he is begging in the streets. A friend of theirs have a copy shop in the area Piazza, where he visits regularly and they always buy him food and take care of him. He is a very old man now.

This is Malene, whp gave you the tape in Copenhagen.

The musicians name is Kayesha Seta. When I showed the tape to my friends in Addis Abeba, they told me that he is still alive and he is begging in the streets. A friend of theirs have a copy shop in the area Piazza, where he visits regularly and they always buy him food and take care of him. He is a very old man now.

gloomy,,cute,,,dreamy,,,soothing..overall awesome
i dont why i am loving it so much

rinsing! well done and thanks very much for your obsession

i just posted two tracks of Kayesha Seta on youtube:

yea he is well-known singer of WOLAITA.

The Guy’s Name is Koisha Seta. Below please find the brief I found about him from CNN website.

Ethiopian pop artist Koisha Seta is known in his native country for his upbeat rhythms and traditional African themes. But now Seta may feel more like singing the blues: As Ethiopia’s ETV reported, the singer claims that a major motion picture studio in the United States has borrowed a tune from one of his songs and without his permission used it in a movie soundtrack.

ETV reporter Mesfin Alemu explained that the movie in question is called “Endurance,” and is being released by the Disney studios. The movie tells the story of a self-trained distance runner from Ethiopia named Haile Gebresellassie. Gebresellassie appears as himself in the film, which traces his rise from humble roots to fame in the Olympic arena.

Underscoring the glory of the runner’s career is a soundtrack which contains a tune Koisha Seta says is taken from his song “Gasha Wolalmo Haya,” featured on an album he released several years ago. Seta claims he was not asked permission to use his music in the movie.

“I always get disturbed when I see the film … You know, it’s my work,” Seta complains. He says he has considered a lawsuit over the use of the tune, but that pursuing legal action against a major Hollywood studio is difficult for someone in Ethiopia.

Hah, great response on this cassette, well deserved. His name is Kweysha Seta, once and for all :) the first symbol is a labiovelar kwe. A quite sad, but funny story for many people down here is from when Kweysha Seta was offered a contract for this album. Being illiterate it was said he was fooled to sign it, not understanding that he would only earn 500birr (about 100usd in 1991, rough guessing) for it. It became a big hit, maybe even bigger than expected, and the cover was reprinted several times. Now it’s out of reach in most shops in Addis, and they are saying they stoped getting access to it. The distributor Ethio Music Shop, with the boss named Asrat has been closed with his cassette business for maybe three years now, making money on electronics instead. This shop was a great distributor of traditional music in the 80s and 90s, I really wish that some of his releases will be made accessible again, including this amazing cassette-album of Kweysha Seta. I really hope he gets his share from this runners documentary-film. I am digging track 9!

This shit is beyond #based, indeed.

FYI y’all, I got a message from a reader with more info:

the name of the singer is : Kusha Sseta
Actually on the tape it is written : Demsawi Kusha Sseta (”Singer Kusha Sseta”)
The label is Ethio-Musica Bet
Despite the Year 1984, you should mention that Ethiopian calendar is different than our gregorian one.
So it corresponds approximately to 1991-1992
This is very good choice and a very original one regarding ethio-music panel, I completely agree
It comes from a region called Wollaïta.
The singer already passed the way.

I was surfing around you tube one night and stumbled on Kayesha Seta, he is incredible. Track 5 kills it. Thanks for more info on him, I’m sad to hear of his passing.

Track 5 is my favorite. Sounds like the theme of a spaced out alternative video game from the 80ies on planet zork. Thanks for sharing!

No votes yet for track 8? I love that one! Tho’ of course track 5 is so weird: love that too. Thanks for making it possible to enjoy this!

It is really sad and sickening to see kosha seata currently living in these unpleasant conditions. For those of you who don’t understand Amharic, this is part of an Ethiopian talk show whereby the host was visiting forgotten Ethiopian artists on his special program dedicated to the Ethiopian Christmas festive.

Kosha seata was explaining how he came to be sick after a car accident and now living on random charities for the last couple of years. the level of poverty he is in extends to failing to pay the monthly house rent for the last 4 years (amounting less than a dollar per month on a public housing provided by Gov. )

He also explains, given his financial constraints to provide a demo on a CD, despite having prepared a lyrics and a melody for a full music Album, he is struggling to find producers to release it.

Thanks to the show host now he has got some financial support and a promise to link him with new music producers.