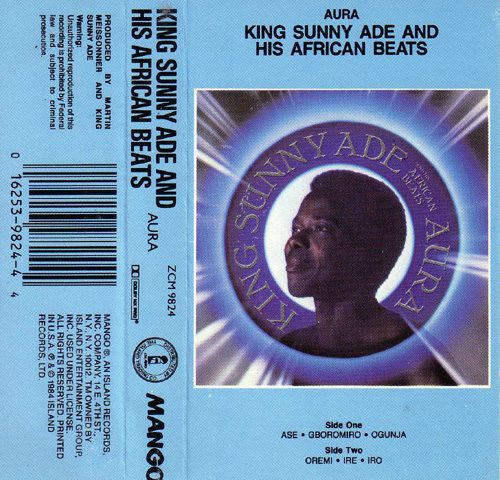 While I did not purchase this tape in Africa, it is certainly one of the most awesome tapes from Africa. King Sunny Adé, along with Fela Kuti, was a central player in bringing African pop music to the world. Is a major international release a strange choice for my usual showcase of rarities/oddities? This record combines the new and novel studio technologies (for 1983-84), like drum machines and synths, with traditional talking drums and good ol’ electric guitars, resulting in brilliant Paradise-Garage-if-it-had-a-Nigerian-branch funkiness.

So many styles of African music have been enhanced by electronic instuments over the years, but few have risen to such sublime heights. I mean, juju music (of which Adé is considered one of the key pillars) gets pretty repetative. I say if you’ve heard six juju records, you’ve heard them all. Aura, then, distinctly stands out. Fans of electro, techno and the like will find this cassette particuarly fascinating.

While not a commercial smash, Aura is one of my all time favorite recordings from Nigeria. Buy this record somewhere. I found a clean copy on vinyl in Denver the other day for $3.

Side One
Ase (featuring Stevie Wonder on harmonica)
Gboromiro
Ogunja

seriously, thank you so much for this! I have to say it’s easily the best King sunny album I’ve heard, reminds me of Remain in Light by Talking Heads (or should that be the other way round!). Tracked down a vinyl copy with a bit of hunting too. Fantastic blog, keep it going…

This album really makes me happy. Thank you so much for this blog – I stop by every week. And your spot on East Village Radio was great!

As Bushie might say, I mis-underestimated this one. In my ’80s boyhood, it was all about “Juju Music.” Never really gave this one or “Synchro-System” much of a chance. For some reason I thought they were disapointing. The folly of youth…

yo, thanks for the kind words!

The Fox In The Snowreply

A most excellent cornucopia of audio treats from the great continent! Thank you so very much for sharing these tunes :)

I’ve been a big fan of King Sunny for a while..his Juju music album is definitely one of my favorites. Aura is a great build on the juju style, so thanks for pointing me in the direction. Just an FYI, however the link for Oremi is not working properly…if you manage to get it back up, let me know!

The Fox In The Snowreply

Oh, and p.s. the link for ‘Ogunja’ is also not working properly…the track downloaded, but is only :06 long! That’s one quick juju jam.

hey, thanks for the head’s up, i fixed those links. glad you’re digging this one.

I have been trying to find this music for such a long time …you see i used to train to this music , this album in paticular! bless you for this Now i can give upcoming students ..a taste of African Martial Culture!!

Thanks for your AMAZING blog. So much new music to dig! My sister lives in Ghana and so I’ve opened up my ears for this truly great music – and thanks to this blog I can dig further in!

This takes me back 20 years. What a memory. I love African music