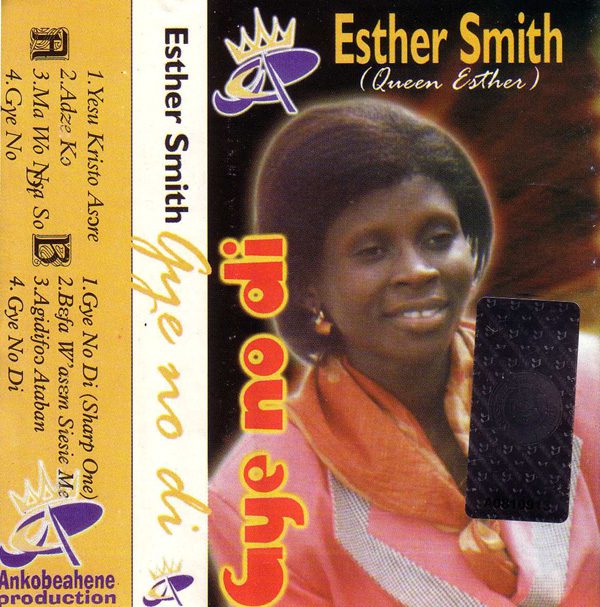 It was only a matter of time before we delved into the most important force in the Ghanaian music industry: gospel music. The scene is just too big to ignore. In Ghana, gospel music comes in all shapes and sizes, from the local church’s traditional drum and vocals recordings (see prior post) to reggae-and-hiplife-infused blockbusters, like Esther Smith’s Gye No Di, which are mass produced and aggressively marketed via radio, tv, internet and trucks-covered-in-posters-and-bullhorns-blasting-the-record campaigns.

There could not have been a bigger album than Gye No Di during my first visit to Ghana in 2002. Pretty much every song on the tape was a hit, played literally tens of times a day by gospel and mainstream radio stations nationwide. I recall waking up each morning to my home-stay sister Nana Akua blasting track 4 on repeat, from like 6am until she left the house an hour or two later. I hated it at first but it now confirms for me the sublime and hidden genius behind many of the commercial gospel productions in Ghana’s top 40 music realm.

Love to hear such sick bass and dreamy keyboard tones amongst all this inspiring talk of faith in Jesus. Acapella breakdowns and sheeny soloist wails from what sounds like it must be a keytar enhance some of the strongest tracks, marked by an asterisk above. This record is just the tip of an enormous iceberg of pop-laden spiritual music that sells more than hiplife and highlife combined in some cases.

Oh and while you’re at it, you should probably check out this Esther Smith music video, it’s kind of amazing.

I love ❤ your music in fact you are good.

I love your song gye no di infact

Infact you are the best